Nearly 30 years ago, the now well-known 1989 International Symposium on Chalk, was held in Brighton and for most geotechnical engineers and engineering geologists the Proceeedings published by Telford became  one of the main staples of their in-house libraries.  Contributions from the Symposium went on to help fund the much later CIRIA 2002 Report C574 Engineering in Chalk which has remained  a primary guidance for those seeking to understand and describe the properties of Chalk and the implications of these characteristics in geotechnical design. 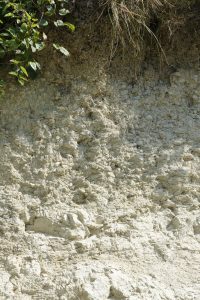 The 2002 CIRIA report built on the knowledge of a range of major infrastructure projects whose foundations/construction were within the Chalk including:

We are now entering a new era of major infrastructure projects also located within the Chalk both on land and off-shore, such as Thames Tideway, Crossrail and various windfarms located in the southern north sea.  These projects have continued to increase our understanding of this important geological unit, a Principal Aquifer (providing much of our water needs in southern and eastern England)  which forms much of the back bone of England.

As a result the British Geotechnical Association and the Engineering Group of the Geological Society have decided that the time is right to bring together the knowledge and experience gained in the last three decades by announcing that they would hold another International Conference on the topic in London in 2018.  This is the first announcement and a call for abstracts is not anticipated until Autumn 2016.  To find out more and how to get involved please visit the BGA website here.

Working on CIRIA ‘s update of their Environment Good Practice on Site has really brought home to me the crisis facing wildlife in the UK. Thank you for sharing . https://lnkd.in/e--YdEQv

A great evening, good to catch up with you in person! Thanks to Ben de Waal at The Fiscal Incentives Group for inviting me to join you all https://lnkd.in/e76czF59

With the change in criteria for assessing #waterquality 0% of #surfacewater bodies meet the criteria for achieving good chemical status in England see for details https://www.gov.uk/government/publications/state-of-the-water-environment-indicator-b3-supporting-evidence/state-of-the-water-environment-indicator-b3-supporting-evidence